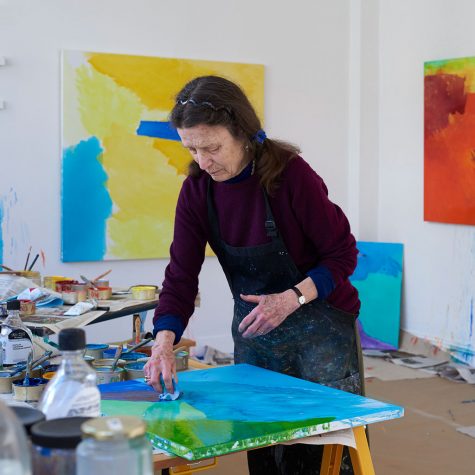 Born and raised in New York City, Emily Mason’s art education began at home with her mother Alice Trumbull Mason, a founding member of the American Abstract Artists. A graduate of New York City’s High School of Music and Art, she attended Bennington College and the Cooper Union. In 1956 she was awarded a two-year Fulbright grant to paint in Venice, Italy. There she studied at the Accademia delle Belle Arti where she first experimented with blotting and transferring paint onto the surface of the canvas. Afterwards, Mason moved into her own studio in the Giudecca. During her time in Venice, she married the painter Wolf Kahn. They have two daughters, Cecily and Melany.

Mason has spent more than six decades exploring her distinctive vein of lyrical, luminous abstraction. Robert Berlind wrote in Art in America, “Mason works within the improvisational model of Abstract Expressionism, though notably without angst or bravado. Her oil on canvas paintings are distinguished by a sense of intriguing intimacy combined with uncompromising, though gentle, intensity. They evince a sense of structure within open, luminous space and juxtapose robust color harmonies with vivid contrasts that create an engaging optical vibration.”

Since her first solo show in 1960 at the Area Gallery, Mason has exhibited regularly in New York City. In 1979 she was awarded the Ranger Fund Purchase Prize by the National Academy. She taught painting at Hunter College for more than 25 years. Her work is included in numerous public and private collections.

In 2006, George Brazilier published Emily Mason: The Fifth Element, a comprehensive treatment of her work by David Ebony and Robert Berlind. In 2015, UPNE released her second monograph Emily Mason: A Light in Spring, featuring prints and paintings since 2005 and edited by Ani Boyajian with articles by David Ebony and Christina Weyl.